Tooth extraction is the removal of teeth from the dental alveolus (socket) in the alveolar bone. Extractions are performed for a wide variety of reasons, but most commonly to remove teeth which have become unable to restore through tooth decay, periodontal disease or dental trauma; especially when they are associated with toothache.

There are various procedures of tooth extractions depending upon the case to case. The dentist decides the best way after clinical examination and taking x-ray to see the position and condition of the tooth to be extracted and accordingly decides whether the tooth can be extracted simply or some surgical procedure for tooth extraction has to be adopted. There are two ways of extracting or pulling out the teeth. These two ways are:

are performed on teeth that are visible in the mouth, usually under local anesthetic, and require only the use of instruments to elevate and/or grasp the visible portion of the tooth. Typically the tooth is lifted using an elevator, and using dental forceps, rocked back and forth until the periodontal ligament has been sufficiently broken and the supporting alveolar bone has been adequately widened to make the tooth loose enough to remove.

Typically, when teeth are removed with forceps, slow, steady pressure is applied with controlled force.

Frequently, the tooth may be split into multiple pieces to facilitate its removal. Surgical extractions can be performed by local anesthetic or under a general anesthetic. 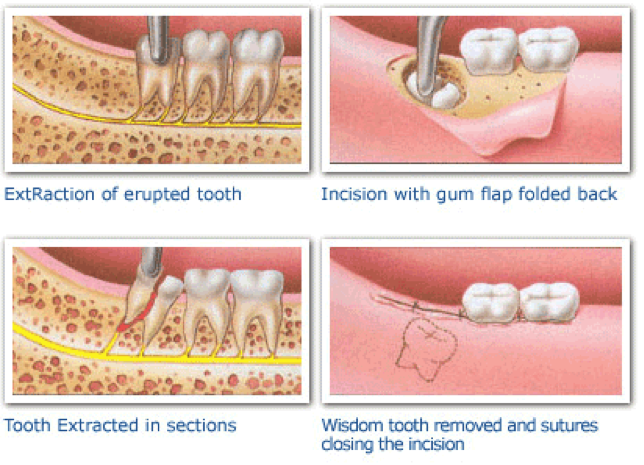 After the tooth is removed, a bite pack is used to apply pressure to the tooth socket and stop the bleeding. After tooth extraction, dentists usually give advice which revolves around not disturbing the blood clot in the socket by not touching the area with a finger or the tongue, by avoiding vigorous rinsing of the mouth and avoiding strenuous activity.

If the blood clot is dislodged, bleeding can restart, or alveolar osteitis (“dry socket”) can develop, which can be very painful and lead to delayed healing of the socket.
Antibiotic use in relation to tooth extraction

Antibiotics can be prescribed by dental professionals to reduce risks of certain post-extraction complications. There is evidence that uses of antibiotics before and/or after impacted wisdom tooth extraction reduces the risk of infections by 70% and lowers incidence of dry socket by one third.

For every 12 people who are treated with an antibiotic following impacted wisdom tooth removal, one infection is prevented. Use of antibiotics does not seem to have a direct effect on the manifestation of fever, swelling or truisms seven days post-extraction.

Immediately following the removal of a tooth, bleeding or just oozing very commonly occurs. The pressure is applied by biting on a gauze swab and a thrombus (blood clot) forms in the socket (hemostatic response).

Sometimes 30 minutes of continuous pressure is required to fully arrest bleeding. Talking, which moves the mandible and hence removes the pressure applied on the socket, instead of keeping constant pressure is a very common reason that bleeding might not stop.

This is likened to someone with a bleeding wound on their arm, when being instructed to apply pressure, instead holds the wound intermittently every few moments.

Coagulopathies (clotting disorders, e.g. hemophilia) are sometimes discovered for the first time if a person has had no other surgical procedure in their life, but this is rare. Sometimes the blood clot can be dislodged, triggering more bleeding and formation of a new blood clot, or leading to a dry socket (see complications).

Some oral surgeons routinely scrape the walls of a socket to encourage bleeding in the belief that this will reduce the chance of dry socket, but there is no evidence that this practice works.

The chance of further bleeding reduces as healing progresses, and is unlikely after 24 hours. The blood clot is covered by epithelial cells which proliferate from the gingival mucosa of socket margins. It taking about 10 days to fully cover the defect. In the clot, neutrophils and macrophages are involved as an inflammatory response takes place.

The proliferative and synthesizing phase next occurs, characterized by proliferation of estrogenic cells from the adjacent bone marrow in the alveolar bone. Bone formation starts after about 10 days from when the tooth was extracted.

After 10–12 weeks, the outline of the socket is no longer apparent on an x-ray image. Bony remodeling as the alveolus adapts to the edentulous state occurs in the longer term as the alveolar process slowly resorbes. In maxillary posterior teeth, the degree of pneumatization of the maxillary sinus may also increase as the antral floor remodels.
Replacement options for missing teeth

Following dental extraction, a gap is left. The options to fill this gap are commonly recorded as “BIND”, and the exact choice is agreed between dentist and patient based upon several factors.

25th Anniversary 1995 - 2020
“Apex Profound Beauty is recognized as the No.1 health institute that performs the most Coolsculpting, Thermage, Ulthera procedures worldwide.”